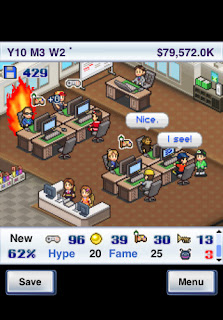 Since many of these systems are time based, where you spend money to receive a benefit in the future, it all feeds into the feeling that if you play “just one more turn” something amazing will happen, you’ll get rich, and your games will sell millions.
Posted by Christina Norman at 8:12 AM

Game looks really fun and if you can manage to enjoy a microcosm of your full-time job in your spare time, it must be good.

Things not well explained:
Only certain jobs can do each of the solo tasks, eg. Writer for proposal. Although someone who has switched class to something new can still do it.
You can unlock special classes like producer, director, hardware engineer and hacker by getting various prereqs of other classes. eg. Hardware engineer needs level 5 in every previous class.
A hardware engineer lets you produce your own console, if that console is good enough it can have better market share than than the defaults. In retrospect it might not have been a good investment (costs $30M+ and takes about a year to do which could have been spent making 4 games)
Good genre combos give you more direction points for all future games.
New genres are gained by training employees (possibly of a certain type) in the various types of training. eg. Jogging gave me the Exercise genre.
Each type of Training has different maximums. Anime is the best overall value until like 200-ish, but that might be dependent on class. (if you want to exploit you can save just before trying and try to get the triple training - which also has no maximum, but it seems to autofail after 2 or 3 such scumming attempts)

Strategy tips:
Taking contracts at the start is usually good.
Training one person up to producer or director while ignoring others is best, I think.
PC games to start with is fine.
Don't spend much on training your initial guys.
Start next project the second you finish the previous, no watching sales totals.

Things I might do differently:
Don't bother making a hardware engineer asap, especially if not making a console.
Get every boost and use them on early franchise candidates.
Make sure solo jobs are alternated (maybe to people with lots of energy?)
Buy advertising before bugs are finished, to increase hype?
Start making games sooner (my first game was in year 7)
Figure out Direction increasing combos and use them as much as possible.

Thanks for your tips Mike, some of my own tips.

I think saving up to invest 3.5 million in a hollywood agent, and then hiring a few hackers is a really good idea. Easier than training up your own guys to be hackers.

Hire guys right after you pay your yearly salary, you won't have to pay them a cent for another year (combo with hiring hackers via a hollywood agent).

It looks like focussing on making one aspect of your game really good has a better return then making the entire game great, so if you want to use a boost use one that enhances your highest stat. If you're going to pay a lot of money to bring in a contractor focus on one good contractor rather than hiring a bunch of mediocre ones.

Some other poorly explained things:
You get to upgrade your office twice, first to 6 people for around $1M. Then 8 people for $2M (maybe more?)
Increasing the quality of contracts will give lots of bugs if they fail (and seem to fail more often than the suggested %). Failing an attempt to improve on a contract job has no penalty that I can see.

Eventually, you want 3-4 franchises to cycle through without losing fan support.

The Hollywood agent asap is good, but I'm pretty sure the best hackers also had $8M+ contract fees to hire them.

I'll have to try that single resource focus idea.

Do we want to throw down our discovered combos here, or leave them for everyone to discover on their own?

Spoiler - Animal Racing is a go-go!

has some genre combos. And some other tips.